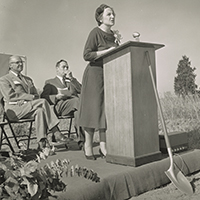 Click the image above to view Charlotte College photographs

This collection consists of photographic prints of Charlotte College and includes prints of the Central High School location as well as the present site on Highway 49, to which the college moved in 1961. Topics of interest include athletics, especially basketball (including the Charlotte Owls); campus buildings; and student organizations and activities, including classes, clubs, dances, fraternities, awards, and publications. Other topics include faculty and staff, academic departments, campus scenes, commencement, and committees.

Collection is open for research.

Copyright held by UNC Charlotte. It is the patron's obligation to determine and satisfy copyright or other case restrictions when publishing or otherwise distributing materials found in the collections.

Charlotte College was founded in 1946 as one of twelve college centers of the University of North Carolina created as a response to the educational needs of returning veterans. Shortly after receiving legislative approval for Charlotte College, an advisory committee was organized to promote the college and to procure additional funding. A movement began to make the college a four-year, state-supported school, and among the plans advanced to achieve this goal—all of which were unsuccessful—was one proposed by Woodford A. "Woodie" Kennedy to establish the Belk University to be financed by a combination of state appropriations, local contributions, and support from the William Henry Belk family. Davidson and Queens Colleges would have become the liberal arts division of the university, and a new agricultural and technical college would have been created.

In February 1959, the Board purchased 270 acres on Highway 49 for the site of Charlotte College, which had shared facilities with Central High School in downtown Charlotte since 1946. In September 1961 the first two buildings—for liberal arts and science/engineering courses (later named the Macy and Kennedy buildings)—were occupied. The library and college union buildings were completed in 1962, and in 1963 the state of North Carolina purchased an additional 127 acres for Charlotte College. The following year, in the spring of 1964, a gift of about 500 acres by the Mecklenburg County Board of Commissioners expanded the site from 270 to 897 acres.

Bonnie E. Cone, who had been appointed director of the Charlotte College Center in 1947 and had been named director of Charlotte College, the Center’s successor, in 1949, became president of the College in 1961. In September of that year, the Governor's Commission on Education Beyond the High School, on which Bonnie Cone served, was appointed to determine whether the need for higher education facilities in populous areas warranted additional campuses of the university system. This commission’s work led to the suggestion that Charlotte College be incorporated as the fourth campus of the University of North Carolina.

In July 1963 the school became a four-year state-supported college subject to the terms of the State Colleges Act (General Statutes 116). J. Murrey Atkins was appointed chairman of the new board of trustees, but he died before taking office, leading to the appointment of Addison Hardcastle Reese as chairman.

At the time it enacted the State Colleges Act, the General Assembly also adopted procedures for the expansion of the Consolidated University. The executive committee of the Board of Trustees of the University of North Carolina designated Mecklenburg County as the first to be studied under the expansion procedures. University of North Carolina President William Friday appointed the Advisory Council on Educational Policy, which visited Charlotte College on February 12, 1964, to advise on the designation of Charlotte College as the fourth campus of the university system. The council recommended that Charlotte College become the fourth campus of the university, and the General Assembly approved this recommendation on March 3, 1965.

Charlotte College awarded its first and only baccalaureate degrees on June 6, 1965, and on July 1 of that year Charlotte College officially became the fourth campus of the Consolidated University system by act of the 1965 General Assembly.

This collection is arranged both physically and intellectually in a single alphabetical series, with the exception that the Board of Trustees file is physically located at the end of the collection.

When initially received, the records had no arrangement, so archives staff decided to impose a topical arrangement. The files were arranged alphabetically by subject.

In March 2017, the collection was reprocessed in preparation for digitization. The overall number of boxes housing the collection were consolidated to prevent additional physical curling to the photographs. A group of recently discovered photographs were integrated into the appropriate preexisting folders when possible, and three new folders were added to the collection to house the rest of the material. The folder structure of the collection was reassessed, with redundant folders being combined, other folders being split to reflect the two campus locations, and four post-1965 folders being moved to UA0066. Additionally, folders for three subjects - classes, faculty/staff, and students - were completely reprocessed at the item level and given a hierarchical folder structure (Classes, Classes--Creative Arts, Classes--Industrial Arts; Faculty/Staff--Alphabetical, Faculty/Staff--Cone, Bonnie, Faculty/Staff--Groups; and Students--Alphabetical and Students--Groups).

Finding aids are guides to archival collections, including manuscripts, university records, and oral history collections. These guides help you find physical collections which can be viewed in the Dalton Reading Room on the 10th floor of Atkins Library. A small number of finding aids link to digital content online. Please contact us to learn more or to schedule an appointment: